Many have yet to comprehend the implications of this continuing business trend to grow, merge, centralise and consolidate. I hope the following will help. If these companies are to continue their takeovers, and rule our planet – then shouldn’t we consider what it will be like in their servitude? Depending on what part of the world we live, many of us get to vote our governments into office. The choices offered might not be ideal, but at least there’s a semblance of democracy. But, certain enormous corporations are gaining the power of governments – even over governments – and I haven’t seen the ballot slip.

Imagine yourself as a farmer. I know it’s not easy, since few do it anymore, but give it a shot. Picture yourself as a seasoned farmer on the Canadian prairies. You’ve been working your farm for fifty years, with your wife working at your side. Despite the vicissitudes of life, and heavy pressure from ever-enlarging mechanised farms around you, you’re still there. Then, one day, you find a large seed and chemical company has filed suit against you – because they’ve found their genetically engineered plants on your land. Firstly, you’re wondering how representatives of this company came to be sniffing around on your land without your knowledge or permission, and secondly, you’re perplexed because you’ve never bought the seed they accuse you of using. In fact, you’ve deliberately avoided using such seed, and have survived competition by saving your own, developing improved strains through the age-old process of natural plant breeding. Furthermore, despite their genetically modified seed having contaminated your own natural crop – an irreversible action with major long term biological and financial implications for you and any farms around you – you find the courts are only interested in protecting the rights of the ‘copyright holder’ of the seed, even while acknowledging that the seed may have blown in from neighbouring fields or passing trucks. It turns out that it doesn’t matter how the seed got onto your property, or whether or not you knew it was there. It’s on your land, so you have to pay.

“Whether Mr. Schmeiser knew of the matter or not matters not at all,” said Roger Hughes, a Monsanto attorney quoted by The Western Producer, a Canadian agriculture magazine…. “It was a very frightening thing, because they said it does not matter how it gets into a farmer’s field; it’s their property,” Schmeiser said, in an interview with Agweek. “If it gets in by wind or cross-pollination, that doesn’t matter.” – percyschmeiser.com

Most farmers are too busy with the day to day task of trying to run their farms, so risking bankruptcy – losing everything they’ve worked for – by taking on a powerful corporate giant in court is a decision most don’t dare to make. But, you decide that you’re not going to take this lying down. You endeavour to not only defend yourself against their suit, but counter-sue for contaminating your fields. Even though you and your wife are on the verge of retirement, and could just roll over on this, you risk all and battle the giant in court. That’s the story of Percy Schmeiser. You can read about it here, and more info here.

Percy didn’t lose the farm, but the court results to date are far from ideal. Is it just me, or is there a seriously backward legal perspective here? I mean, if I throw a rock through your window, and then file suit against you for keeping it, you’d think I’m barmy, yes? But no, industry influence has somehow skewed legal thinking into a wonderland that even Alice wouldn’t visit. Shouldn’t the corporation be fined for not keeping their genetically modified seeds within their own borders, and shouldn’t the farmer be compensated for the loss of purity of his non-GM crops? If we continue to follow this way of thinking, where will this end? And where, where, where is the concern about the inability of GM farmers to contain these seeds? Ecological issues aside, as alarming as they are, these seeds that are blowing all over the place are making the whole world a potential ‘captive market’ for the seed companies. Pollen and seeds are uncontrollable, and at the moment the ‘lucky recipient’ must surrender to the demands of the company – essentially becoming a legally obliged subscriber to a service they not only never asked for, but that operates on a biological and economic philosophy they may wholly reject. The central issue here, is this ability for a company to patent life. A small genetic change to an organism can enable an organisation to seek intellectual copyright, and charge technology fees and other costs for its use. With life forms, unlike a widget on a conveyor belt, the ‘product’ is self perpetuating (unless that ‘feature’ has been removed by the company – a whole other problem on its own). This effectively means, if unchecked, organisations that megalomaniacally tinker with the building blocks of life (seeds, or otherwise), can take control of everything that makes this planet tick. The story above, as infuriating as it might be, is nothing compared to the behind-closed-doors activities in developing nations. Here is just one of many examples:

As part of sweeping “economic restructuring” implemented by the Bush Administration in Iraq, Iraqi farmers will no longer be permitted to save their seeds. Instead, they will be forced to buy seeds from US corporations — which can include seeds the Iraqis themselves developed over hundreds of years. That is because in recent years, transnational corporations have patented and now own many seed varieties originated or developed by indigenous peoples. In a short time, Iraq will be living under the new American credo: Pay Monsanto, or starve. … A new report by GRAIN and Focus on the Global South has found that new legislation in Iraq has been carefully put in place by the US that prevents farmers from saving their seeds and effectively hands over the seed market to transnational corporations. This is a disastrous turn of events for Iraqi farmers, biodiversity and the country’s food security. While political sovereignty remains an illusion, food sovereignty for the Iraqi people has been made near impossible by these new regulations. “The US has been imposing patents on life around the world through trade deals. In this case, they invaded the country first, then imposed their patents. This is both immoral and unacceptable”, said Shalini Bhutani, one of the report’s authors. – Vegsource (see also)

This is a process where a few men, under the protection of laws of incorporation, transform themselves into gods. These kind of rulers we can do without. Please, say “YES!” to full-disclosure labelling, “NO!” to genetically modified organisms, and “NO!” to patents on life. 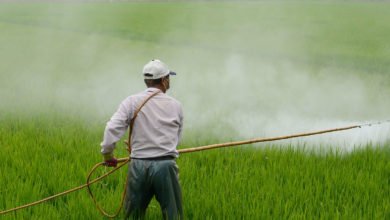