Since moving to North Carolina a couple of years ago—my, how time flies—Emma and I have developed a minor obsession with foraging. We’ve learned to confidently identify over a dozen types of edible wild mushrooms here, dining on choice varieties as chanterelles, maitake, chicken of the woods, and comb tooth (Hericium coralloides), a relative of the highly medicinal lion’s mane. We’ve also frequently enjoyed wild plants such as chickweed, dandelions, trout lily (Erythronium americanum), and wild onions, amongst others. One thing that has largely eluded us, however, is something the area is famous for: ramps.

Ramps (Allium tricoccum), also called wild leeks, grow in the understory of the forest. In the US, they are found from Maine (and further into Canada), down to Georgia, and over to Minnesota. For us, they thrive in the Appalachian Mountains, which is where we now live. They have a taste reminiscent of the other alliums (onions, garlic, leeks, and scallions) and are explained as an enticing mix of these flavors and odors. Unfortunately, the demand for ramps, a slow-growing plant popularized as a delicacy in trendy kitchens, has put it in various states of conservation and endangerment. Rightly so, many places now limit what can be harvested.

Since we’ve had no luck finding them as of yet, and we know that they are now fighting for survival, we are planning to cultivate them as an understory crop in the forests around our house and perhaps further afield. Before getting started on that, I thought it’d be nice to research a little more on ramps and share what I’ve learned. 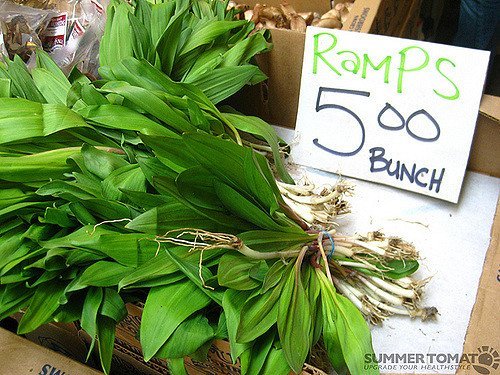 History of a Slow-Growing Perennial

Like other alliums, ramps have edible bulbs, and the entire plants—bulbs and leaves—have traditionally been pulled up when harvesting. However, with this, the plant then dies, and ramps have a slow path to maturity, around five to seven years. In other words, replacing a patch of these plants is not something that gets done lightly. Nevertheless, hip chefs have become hooked (a pound of ramps can now garner over $10), so they have been thoroughly picked over. It’s become a real problem.

The truth is that ramps have been beloved in the region for centuries. The Cherokee used ramps, one of the first spring greens to pop, as a spring tonic. Further north, the Iroquois tribes, a Native American alliance, used it medicinally, as did the Ojibwa a little further north, above the Great Lakes. In fact, the city of Chicago is actually named after thick patches of ramps that grew along the Chicago River: the indigenous name for ramps was shikaakwa(pronounced similarly to Chicago). In other words, nearly every tribe that inhabited the same space as ramps appreciated them.

After colonialism, the ramp has continued to be revered. Settlers of Appalachia also used it to fight off winter illnesses, taking advantage of the high content of vitamins and minerals after winters lacking in vegetables. Even today, ramps are celebrated in local festivals throughout Appalachia, in West Virginia, Virginia, Tennessee, and North Carolina. Unfortunately, ramps have now been harvested to such an extent that they are listed as a “special concern” in Maine and Rhode Island, as well as in Tennessee where they have also been deemed commercially exploited. Quebec has actually listed ramps as threatened and banned the sale of them, and harvesting ramps is prohibited in Great Smoky Mountains National Park.

With that in mind, the thought of foraging for ramps this spring begins to sour a little. However, as with many of the mushrooms we enjoy, protocols for harvesting ramps sustainably exist. Modern, responsible foragers have come to concentrate on carefully picking the leaves—just one leaf per plant—rather than pulling up the bulbs. The leaves are delicious, and the perennial can then live on and continue providing treats for years to come. The other thing people are doing is cultivating their own patches of “wild” ramps, and herein lies some real excitement. 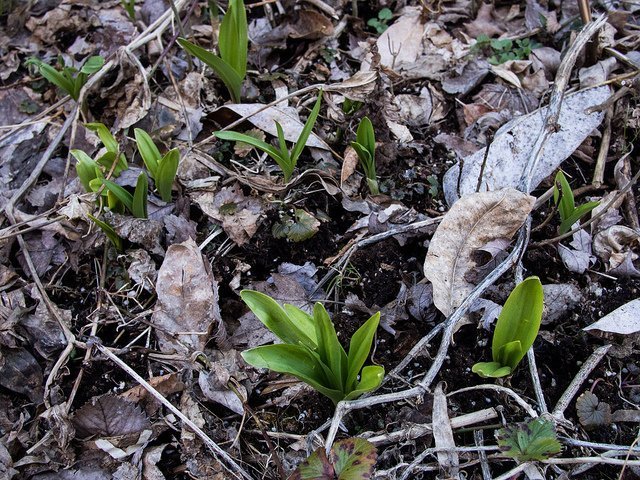 Made in the Shade: Cultivating Ramps

One of the most alluring aspects of cultivating ramps is that they are shade-grown, a perfect partner for (Permaculture) Zone 4 cultivation or possibly adding to the understory of established food forests. With some experimenting, they could make a replacement plan(t) for when support species in the food forest begin to be shaded out.

Ramps like shady, damp places in USDA Zones 3 to 7. They grow well in acidic soil that’s high in calcium, as well as organic matter, and in regions where the rainfall is at least 90 cm annually. Living cues for a good place to cultivate ramps are spots with trilliums, trout lilies, and mayapples(Podophyllum peltatum), all of which have some fashion of edibility, too. They also grow in the same conditions as ginseng, another overharvested, high-dollar, slow-growing wild edible that savvy people are starting to cultivate. Ramps naturally grow under beech, birch, sugar maple, and poplar trees, and they are also known to settle beneath buckeye, linden, hickory, and oak.

According to the Department of Horticultural Science at NC State University,ramps are best sown in the late summer/early autumn. Seed germination requires a period of warm, wet weather for roots to grow. After that, a period of cold is required for the shoots to sprout. In other words, ramps are likely to take six months to germinate, and they sometimes take 18 months if the warm spell after the seeds are sown is insufficient. To plant them, the detritus on the forest floor should be raked back, the soil loosened, and the seeds spread thinly atop it before being gently pressed in and covered back over with the familiar permaculture adage: four to six inches of mulch (composted hardwood leaves). From there, it’s important to keep the area free of competitors until the ramps get their footing.

When established, ramps can grow so densely that they cut off other plants from invading their space. It’s possible to begin harvesting the one leaf after about three years, but for those who want to try the bulbs, it’s going to take five to seven years. In order to keep the patch healthy and thriving, no more than 10% of the plants should be harvested annually for bulbs. When harvesting the bulbs, it’s important to avoid damaging the other plants, so it’s best to use a “digger” or soil knife. Fresh ramps should be washed well, the rootlets trimmed, and the crop stored in a cool place but not an air-tight container. 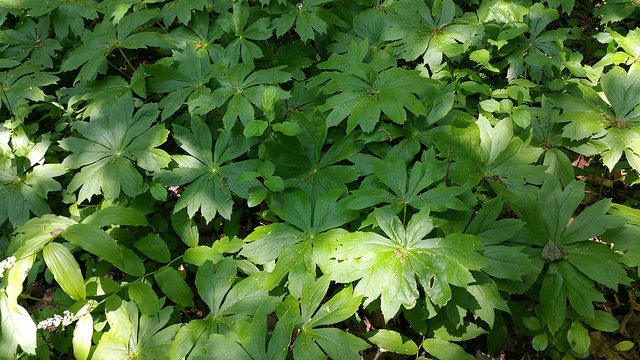 Mayapples in Abundance, photo by karen_hine courtesy Flickr via CC 2.0

And, now I’m really excited because I immediately identified a perfect spot. It’s little a strip of land just beside a nearby creek under a stand of established poplars and oaks. No one ever goes there. In fact, I’ve never even walked in the spot, just observed from the path above. In the spring, the forest floor is replete with mayapples. I’m hoping, in a few years, ramps might become part of that mix. Emma says she knows another spot just as promising.

The battle against bugs: it's time to end chemical warfare