Organic gardens really benefit from manure, and that is no mystery. However, it’s important to be aware of what kind of manure is at your disposal because they are not all equally desirable. Some manures, dare we say, are choice garden additions, while others take a lot of coaxing, a slow and patient cook, from composting gurus. Chicken manure is vastly different from cow manure, which is largely different dog manure.

Understanding some of the subtleties of manure, even in the most basic of ways, can make a huge difference to how, when, and for what you are using a particular pile. For those of us who aren’t connoisseurs of manures, it’s important to get a grasp of which ones we’d most like to get our hands on (or in) and which ones aren’t necessarily best suited for growing our food but could be useful elsewhere. So, with no further puns, let us dive head first into the wonderful world of animal excrement.

Firstly, it seems useful to know why it is that manure is such a valuable commodity. In the garden, it does two things very well: amends the soil and fertilizes the plants. Dry, well-rotted manure is great for retaining water and very useful in sandy soils, whereas the same thing goes along way in lightening up dense clay soils. In either case, fast-draining or compacted soils, manure helps reduce runoff and nutrient leaching. As far as fertilizing, manure carries a good punch of nitrogen (The type of manure changes the levels) and other nutrients, both of which release it slowly (Again, the speed changes via type) to the plants. It’s also full of microbes, which up the amount of soil life, thus fertility, in the garden.

If we were to only break manures into two categories, we’d likely settle for hot and cold, but it would be important to remember this has little to do with polar ice caps or equatorial tropics. Rather, hot manures are typically high in nutrients and low in moisture content. These types of manures release their nutrients much more quickly, likely “burning” plants, so hot manures should always be composted before being put in the garden. Cold manures, on the other hand, release nutrients more slowly and could, theoretically, be applied to the garden without issue. The best and safest practice, most would say, is to “season” manures whether or not they are cold or hot.

Technically, all animal produced excrement, human included, can be considered manure, but the use of some types of manure can be controversial. Most typical farm animals—chickens, ducks, geese, rabbits, sheep, horses, cattle, goats, pigs—produce widely accepted manures, as do other animals, such as Guinea pigs, llama, alpaca, and worms. But, other domesticated animals—dogs, cats, pigs, people—aren’t as highly regarded. Largely, this is based on the potential for pathogen problems. However, the truth is that it’s okay to compost any manure from a healthy animal, as long as the compost pile it is in heats up enough for long enough to kill the pathogens. In reality, our composts should do this anyway to get rid of potential seeds.

It’s probably most useful and easiest to become acquainted with those manures that gardeners most commonly use, as well as that are most readily available. In other words, the domesticated animals that we are most in contact with are probably our best chance for acquiring manure in bulk, so we need to know what each is bringing to the compost pile.

Cattle are ruminants, which is to say they have four stomachs and chew cud (regurgitated, partial digested, internally fermented food). Animals that digest food this way do so in order to get more nutrients out of what they are eating, which, in turn, means less nutrients when said food exits. However, the different stomachs each have different bacteria, and that makes it a great source of microbes and enzymes. Once deposited, the microbial activity actually escalates because the organic matter moves from an anaerobic to an aerobic setting. Other ruminants include sheep, goats, and yaks, as well as wild animals like deer, antelope, kangaroos, wallabies, and giraffes.

Chickens provide very rich manure and are the most common livestock animal, especially on the small-holding homestead. Chicken manure has high levels of phosphorus and nitrogen, and it is notorious for burning plants when it hasn’t been allowed to break down sufficiently. However, it is aces once composted. Plus, chickens provide a host of other functions when cycled with the garden: pest control, weed control, and tilling. This is true, to varying degrees, of other poultry: geese, ducks, turkeys, peacocks, Guinea fowl, ostrich, and emu.

Pigs, like chickens, aren’t vegetarians, so their manure can be a pathogen risk, which is to say that it must be composted properly to avoid problems with that. Additionally, pigs are believed to have parasites, such as roundworms, that can survive the composting process and cause problems later. To avoid controversy and possible issues, and though the way pigs are raised would likely make a massive difference in this regard, it’s probably best to avoid pig manures, composted or not, in the vegetable garden.

Sheep and Goats, though part of the ruminant clan, yield a manure much richer and drier than that of cattle. In particular, sheep and goat manure is rich in nitrogen and potassium. These also come in easy-to-distribute, pellet form.

Rabbits and Guinea Pigs make high-nitrogen, high-phosphorus manures that come in tiny pellet form. Due to urban gardening, these two animals—silent and multiplying—are becoming more and more common as a food source. Though the manure is considered high nitrogen, thus hot, it can supposedly be spread directly onto gardens due to its size. Nevertheless, composting it first is likely the better way to use it.

Horses produce a richer manure than cattle, though not as rich as many other animals, and the horse “apples” are a good binding element for soils and layered mulches. The problem with horse manure can be the source. Often stables will use biocides to keep bedding from being infested with pests, and/or horses are given antibiotics or other things that might taint the manure. Donkeys, mules, and zebras all belong to the same family as horses.

Worms are amazing composters, and they are a great and safe way to deal with food scraps and other manures. Worms will process these things and turn them into worm castings, i.e. manure, which is rich in nutrients and bacteria but mild enough to add directly to gardens. Like rabbits and Guinea pigs, worms are a common part of urban gardens, especially because they deal with food wastes much faster and with less space than a typical compost pile.

Humans, in the scheme of manure that is sure to be around all people, are also great producers of manure, and composting toilets are a great way to take advantage of humanure rather than allow it to become a planetary problem. Thoroughly composted humanure, like pig manure, is still sometimes regarded as a health concern by some, so it is probably best practice to use it on fruit trees and gardens that aren’t growing crops for food. Nevertheless, it’s extremely useful, and everyone has guaranteed access to it.

Zoos can also be a source of manure for those who are interested in making those connections. There are some might big animals that produce mighty big piles there and, because they are no longer in the open prairies or jungles, space is limited for where to put it all. Elephant dung is said to be a good one to go for.

When composting manures, it is important to remember that they are a source of nitrogen, a “green” element, so they need to be balanced out with carbon, a “brown” element. Often, manures are mixed with bedding, and that is a great head start on adding carbon. When this isn’t the case, just mix a little more wood shavings, sawdust, chopped straw, chopped hay, shredded leaves, shredded newspaper or shredded cardboard to the mix. Too much nitrogen makes for a smelly, overly wet compost, whereas too much carbon creates a dry, slow-acting compost pile. If something seems off, simply adjust the ratios and see how it goes. Compost also needs plenty of water, and ideally, a compost pile should have the moisture level of a wrung sponge.

Timing can be a matter of size and aeration (turning), but for a low-maintenance, cold compost, it’s not completely off to give it a year. With debatable manures, such as human, many people opt to turn it after a year and give another for safe measure. It is certainly possible to make composts faster, as little as eighteen days, but that will require a bit more effort and shouldn’t be attempted with humanure or others with potential pathogens and parasites in them.

What Zone 5 Has Taught Me 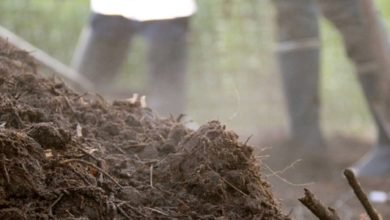 Using Weeds to Read the Soil: Some Basic Concepts to Get Started