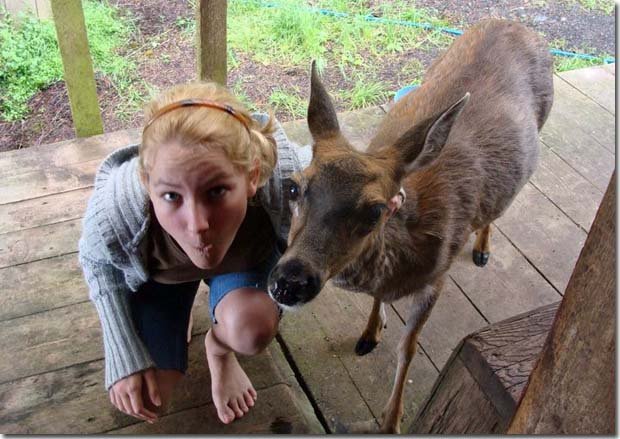 Our deer-proof fence is easy to install and doubles as a poultry fence and triples as a trellis on the inside the entire way around!

Prince of Wales Island is known, among other things, for it’s Sitka Black-tailed Deer population. The deer are extremely naive and often wander by as we are having coffee on the beach or working outside. When we bought the place it came with Lucy the pet deer. Everyday she would come up onto the deck for her piece of bread and a scratch behind the ears. Over the years her fawns had fawns, which had fawns. . . which all considered our place their home ground. The family resemblance in the photo is only coincidental!

Deer can jump high and they can jump far, however they cannot jump high and far at the same time. The various deer fence designs take this limitation into consideration. There are a number of designs for deer-proof fence; Angled fence with 8-10 strands of electric wire, double fence, which is essentially a second fence stacked on top of the first fence, and the simple design that follows. Since materials get barged up from Seattle, then transported 90 miles to our town dock, then into the skiff, around the point and up the bank, we needed a design that required a minimum of materials sourced off-site, and was relatively quick to erect.

While I cut, trimmed and carried the cedar posts, my daughter dug the post holes. After I placed the posts in the holes my wife filled them in and tamped them down. Then my daughter and I tacked the 5′ 2×4 welded wire to the outside of the posts with electrical staples. Then I braced each post from the inside with a cedar 2”x4”. Three foot cross members were screwed to the posts and braces with 4″ screws. The two inside runs that form the trellis are old 12-2 electrical wire that I repurposed. There was almost enough wire for the outside run as well, and I finished it off with old 3/8″ yellow poly rope. If using something more difficult to see, such as heavy monofilament fishing line, it would be a good idea to tie some type of flagging to make it more visible to the deer and other animals. 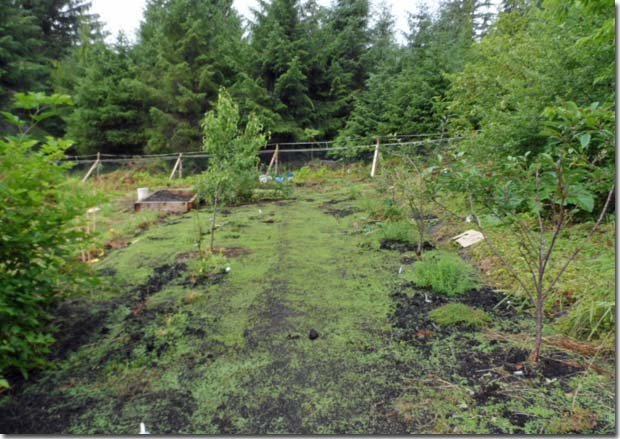 The two inside runs of wire are 1′ and 2′ away from the fence. The outside run is 1′ away (hence the 3′ cross member). To top it off I strung a run of 12-2 wire about 14″ above the fence wire. The low spots that created a gap between the fence and the ground were taken care of by wiring a length fence wire along the ground. The final touch is a run of electric fence running waist high on the outside to keep the bears out. The electric fence is powered by the strongest solar fence charger on the market. Strips of aluminium foil baited with peanut butter were hung from the electric fence to train the deer and bears to keep their distance.

The inside trellis will be used for any number of peas, beans, grapes, etc. . . It has been two years since the fence went up and so far no deer (or bears) in the garden. The fence is effective as by the time the deer walk up to the fence the outside strand is overhead. They see the other strands and do not want to jump from farther back and risk getting tangled. It also helps that we have established deer foods such as clover, vetch and native berries outside of the fenced area for dining pleasure. 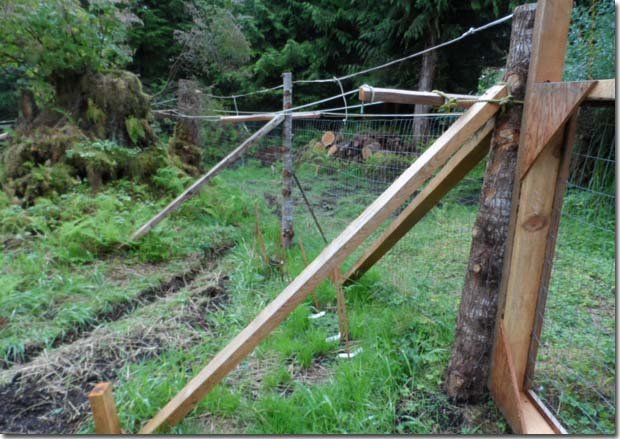 How to build a Geo-Solar Greenhouse