When I was in Australia over a year ago, Geoff mentioned that a former student and her partner were converting their pool into a fish farm. I didn’t have a lot of time to spare, but told him I had to go. A day or so later I was poking around Vanessa and Justin’s pool, fussing about with my camera and notepad. The resulting article has since become one of the more popular ones on the site.

Perhaps there are a lot of people out there with useless, empty swimming pools? If so, here’s even more encouragement to get busy and do something with it! This family has, apparently, become self-sufficient in food production in record time – just by making clever use of their disused swimming pool. 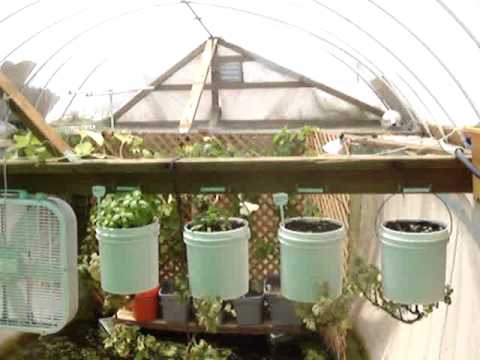 A taste (excuse the pun) of some of the info available at their site:

I totally love the idea of a closed loop food production system. Who wouldn’t? My only concern is over the hydroponic aspect – where plants are taking up nutrients too readily, as they’re in water soluble form. You could describe plants as being something of a ‘high tech’ pump. When given the opportunity, they’ll take and take until they can take no more. In the soil, this ‘taking’ is regulated by soil micro-organisms which effectively feed plant roots balanced quantities of the nutrients they require, in slow release, measured quantities. But in water, with no soil or microorganisms present, nutrient intake is not moderated. As I wrote in Soil – Our Financial Institution, excessive soluble nitrogen intake, in particular, can be hazardous to our health – even carcinogenic:

This natural process of micro-organisms feeding plants is significant, and highly complex. Through the work of these creatures a plant receives what we might call a ‘balanced diet’. To illustrate: What do you think a small boy would do if you gave him an enormous bar of chocolate to eat? Chances are good he’d keep eating it until it made him sick (even if half of it is still left on his face!). Children are unable to gauge an appropriate quantity, and will quickly scoff all they can fit in. The result? Even if he doesn’t make himself ill, your child goes on a physical and emotional roller-coaster ride until the refined sugar-induced energy dissipates. A wise parent might instead supply an appropriately sized portion of ’sugar’ in its natural state – bound up with fibrous dry matter in the form of whole fruit.

Modern agri-businesses do similar with their water-soluble fertilisers – they set a ‘meal’ before the plant that can be immediately absorbed by plant roots, essentially by-passing the balanced slow-release feeding by micro-organisms. Just like a child, this affects a plant’s health.

Pesticide residues are not the only problem arising from modern agricultural techniques. Increasingly, nitrate levels in vegetables are causing concern, although most attention so far has been focused on nitrates in water supplies…. About 70% of average daily nitrate intake comes from vegetables, compared with only 20% from drinking water. Nitrates are taken up very readily by crops, and if they are not utilised immediately in the formation of protein, they are stored in the cells in their original form. There is then the risk that when nitrates are ingested or cooked, they convert to nitrites which can potentially combine with amines to form carcinogenic nitrosamines. – Organic Farming, Nicholas Lampkin p.565.

Perhaps an even better way to describe hydroponics than the chocolate bar analogy would be to say that it’s like taking food directly into your veins, in liquefied form via hypodermic needle – bypassing the digestive processes of the stomach. The soil could be likened to the stomach in this sense – it digests and distributes food to plants.

There’s a knock-on impact, or consequence, of this form of feeding. As my Soil article continues to share, plants fed highly soluble nutrients grow fast and look great, but can be chemically imbalanced, and thus unhealthy – and unhealthy plants attract ‘pests’ and disease. Insects and fungal disease are attracted to such plants, particularly since, in addition, the environment they’re grown in tends to be excessively moist and anaerobic. Hydroponic systems often collapse because of this. Cleanliness/sanitation and isolation have been very important in keeping hydroponic systems functional, and newer hydroponic systems have begun to incorporate root sanitising systems utilising ultraviolet light or other.

I’d love to hear thoughts from you guys – particularly aquaponic savvy people who understand the thoughts I’m expressing here. Ideally we’d design such a system as above, but somehow design it so soil and microrganisms can still play their role, and ensure the plants we’re getting from the system are not only inexpensive, plentiful and low-to-no input, but healthy too!